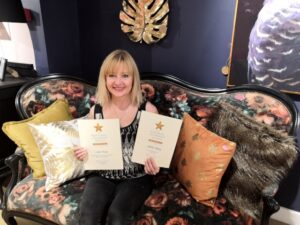 It was my interest in community theatre and performance art that lead me to become a Celebrant. I’m inspired by the work of Welfare State International and trained with them in the course ‘Rites of Passage’  which focuses on the use of art in ceremony and celebrations. This was when I first heard of the British Humanist Association, (Now known as Humanists UK) as some of the company had done the BHA Celebrant training.

My work as a Celebrant is enriched by having a theatrical background and a wide variety of experience in working with people of all ages and abilities in different roles; leading groups, advising, supporting, mentoring, drama, interactive storytelling and sharing skills through workshops.

A company I very much enjoyed working with are Alive and Kicking Theatre Company where I learned all about creating imaginary worlds, interactive storytelling and creative and fun learning.

I have a commitment to ongoing professional development and attend Relevant Conferences & Workshops with Humanists UK & Other Providers to keep up with new ideas and improve my practice.

I work as a mentor for trainee celebrants which is very rewarding and causes me to reflect on the quality of my own work. I’m also an Accreditation Observer and Celebrant Network Coordinator for Yorkshire and The Humber.

Working with people it’s been beneficial to have Counselling Skills & other Interpersonal Skills Training. And other practical training such as Voice Work which I’ve done with Maggi Stratford  .

My Open University study included the course ‘Death & Dying’ which looks at the social, historical, medical, ethical and cultural contexts of death, dying and bereavement.

I am an accredited member of the Non-Religious Pastoral Support Network and will be joining the Spiritual Care Team at St Leonard’s Hospice in York after the C-19 crisis.

In February 2020 I trained and accredited with The Hospice Biographers I’m looking forward to starting to work with people in this role at St Leonard’s Hospice in York after the C-19 crisis.

I have a strong belief and interest in reducing stigma around death and empowering people to be involved in caring for their loved ones at the end of life and organising their own funerals. I’m a member of The Natural Death Society and I am on the committee for York’s Dead Good Festival