The power of song and singing in humanist ceremonies 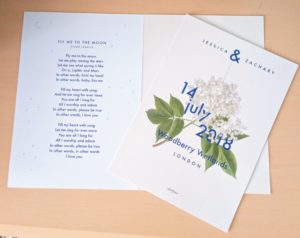 Fly Me To The moon lyrics in Jess & Zac’s order of service. Image © Sue Walder

There’s something special about singing together, isn’t there? At a recent humanist wedding ceremony I conducted, just after the couple had made their vows to each other and exchanged rings, we joined voices and sang the famous Frank Sinatra tune Fly Me to the Moon.

Most wedding ceremonies I’ve conducted feature music as the bridal party enters and again as the newly-weds walk back down the aisle together. Some ceremonies may also feature someone playing music or singing during the ceremony. But this was the first time I had been part of a group singing together at a humanist ceremony. And it was fabulous. Everyone was smiling and swaying as we strove to stay in tune and keep in time with the pianist!

It was a wonderful way to involve all the guests in a joyous moment. Singing together also helped everyone literally voice their love and support for the couple on their special day.

Scientists have found that group singing helps forge social bonds and improves feelings of well-being. It’s why football fans chant throughout a match. There’s something powerful about being physically present for such a communal act – the very opposite of the experience provided by so-called social media.

Of course, religious wedding ceremonies often include the commmunal singing of hymns. But I wonder if any hymn could come close to the feeling of collective joy that we felt when singing Fly Me To The Moon at Jess and Zac’s wedding?

And if you don’t think your guests would be up for a communal sing-a-long then why not consider hiring the services of the London Humanist Choir? The choir performs at many different events and can even be hired to perform at weddings.

Here’s a short clip of the London Humanist Choir in action singing Fleetwood Mac’s Everywhere at a wedding in 2016. It was one of three songs performed by the choir at the same wedding – the other songs being Africa by Toto, and One Day Like This by Elbow:

Of course, communal singing can be a lovely thing to do at a humanist naming ceremony too.

I once conducted a naming ceremony for a little girl called Mahli Rae. At the end of the ceremony her parents had organised a Rastafarian drummer to lead us all in chanting Mahli Rae’s name in different rhythms. It was joyous and life-affirming and provided a moving connection to her Jamaican ancestors.

And I’m looking forward to singing that old tune made famous by Doris Day – Que Sera, Sera – at little Freya’s welcome and naming ceremony. It’s become a family tradition to sing this song. Freya’s grandmother Kym used to sing it to Kerry, and now Kerry is singing it to Freya. The ceremony is being held in Kerry’s back garden so it’ll be interesting to see if any of her neighbours join us in singing along!