A Wedding Day to Treasure

A Wedding Day to Treasure

Planning a Humanist Wedding in Devon

I first met Hannah and Ben in a pub near Topsham. I seem to have a lot of my first meetings in pubs. I always say it’s where I do my best thinking. They were on their way back home to London after a trip to Devon. They were later to tell me that they love it down here, enjoy walking on Dartmoor and visiting the coast and so planned to live in this beautiful county eventually – perhaps when they start a family. They mentioned their jobs in radio – in fact they’d met at Radio 4 – and their busy lives in the capital. They were excited about having a simple ceremony at a family farm in Whimple. Of course, this was back in January 2020, when we were all blissfully unaware of what was to follow. 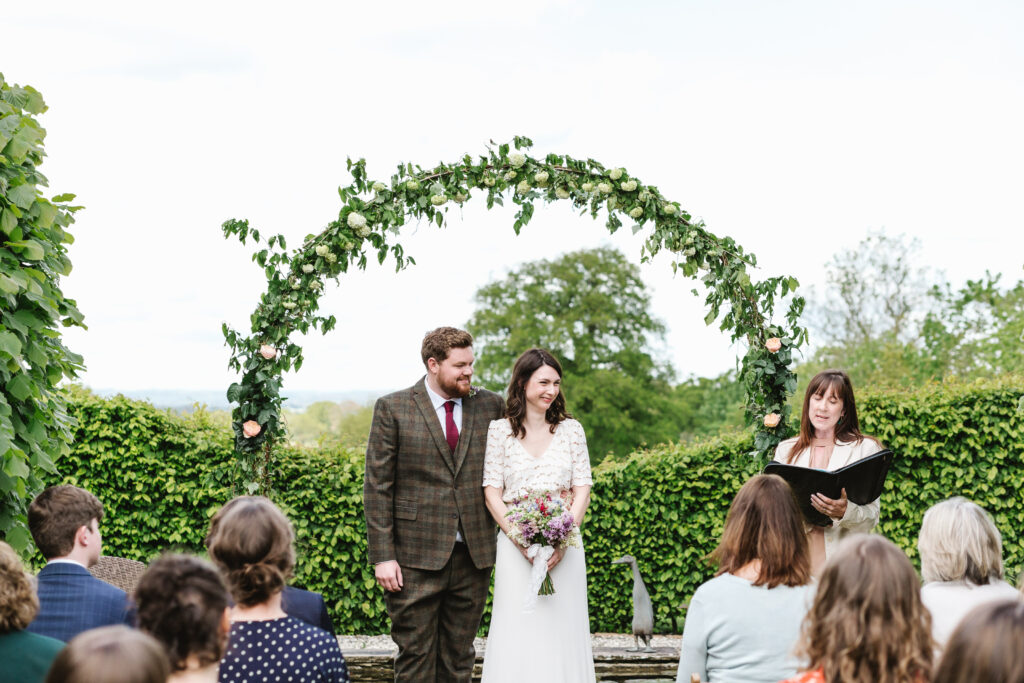 Covid-secure, but what about the weather?

Like many other couples, in the midst of huge Covid-induced uncertainty, we planned their wedding on Zoom. A lot of our sentences began, “All being well…” We hoped for the best and decided for the sake of sanity to just plough on and assume the wedding was happening. My chats with couples have two main elements: the practical bits about the ceremony itself, such as what readings a couple might have, who will have the rings, what entry music they have chosen and so on; and the bit where I get to know the story of their relationship to date, what has brought them to this point and their hopes and aspirations for their lives together. Their original date, 5th September 2020, went by and they had to postpone a couple of times before settling on Saturday 22nd May 2021. This new date was perilously close to the 17th May ‘Step 3’ announcements after which time 30 people could meet outside and hugging would be allowed at your own discretion. I prepared a Covid risk assessment, but many of the risks were mitigated by the fact that they intended to hold the ceremony in the open air.

Happily the announcement that Stage 3 was to go ahead meant that the wedding could too. The day arrived – along with a band of showers. As a former Met Office employee, I was aware of how difficult it is to forecast where showers are going to land. On my own wedding day (back in the mists of time) there were showers forecast but the whole day was, in the end, a wall of sunshine. As soon as Ben and Hannah’s guests were gathered, there was a break in the cloud and the sun began to shine through – and continued to do so for the whole ceremony. The end of May is a wonderful time of year to get married: the hedgerows are laden with blossom; the watercolour bluebells are abundant and nature is just bursting with new potential. And isn’t that how the marriage of two young people, with their whole lives ahead of them, should also be? Blossoming, abundant and full of potential. 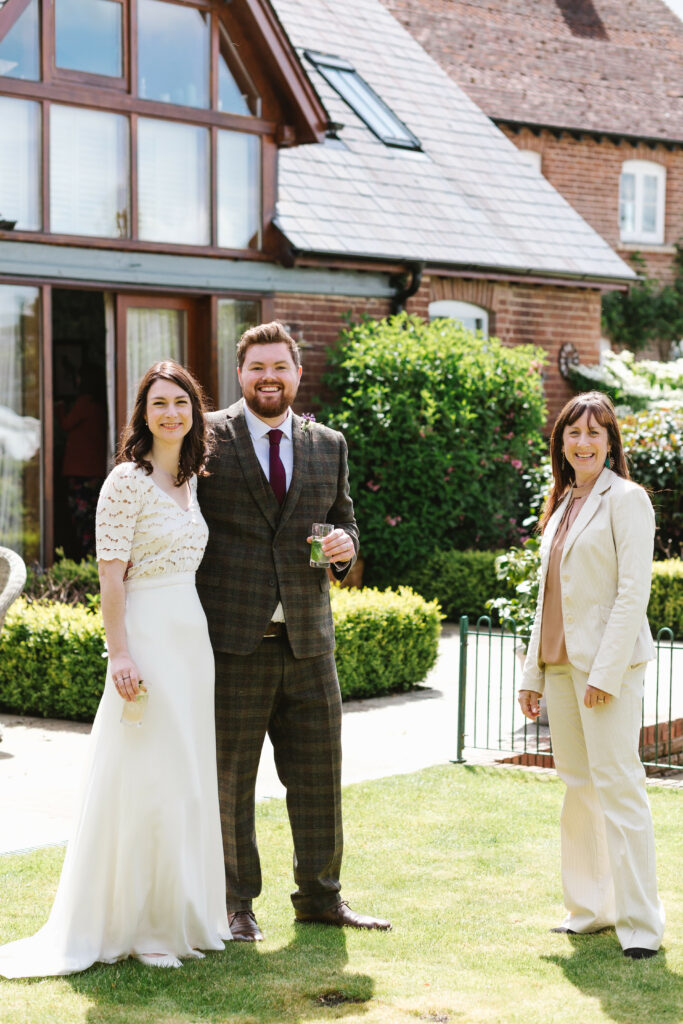 The ceremony area was a tree-lined lawn set up with a beautiful flowered arch at the front. In true humanist non-gender conforming style, Ben told me he’d insisted on having pink flowers: one of his favourite colours.  Hannah walked up the aisle to Detectorists by Johnny Flynn. “Will you search through the lonely earth for me? Climb through the briar and bramble? I will be your treasure.” What perfect lyrics for an outdoorsy couple! 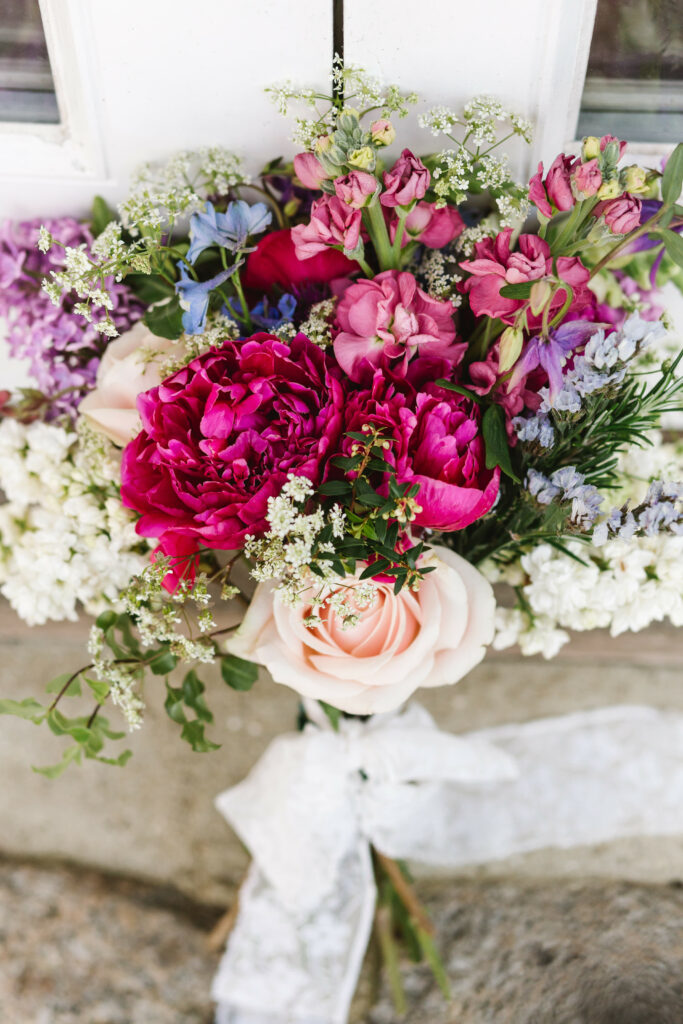 With a rural landscape as a backdrop, we told the story of their love. In similar fashion to many great love stories, their relationship began properly when one of them (Hannah) got drunk and told the other (Ben) that she liked him! Hannah says she never really considered the idea of getting married until she met Ben. It was just two weeks into their relationship, and they were on a night out at what they describe as a ‘hipster bowling alley’ in North London, when Ben started talking about wanting to get married some day. I think he must have mentioned it quite a lot, because Hannah said it was no surprise whatsoever when he proposed to her in Berlin. He thought she was going to be astonished! 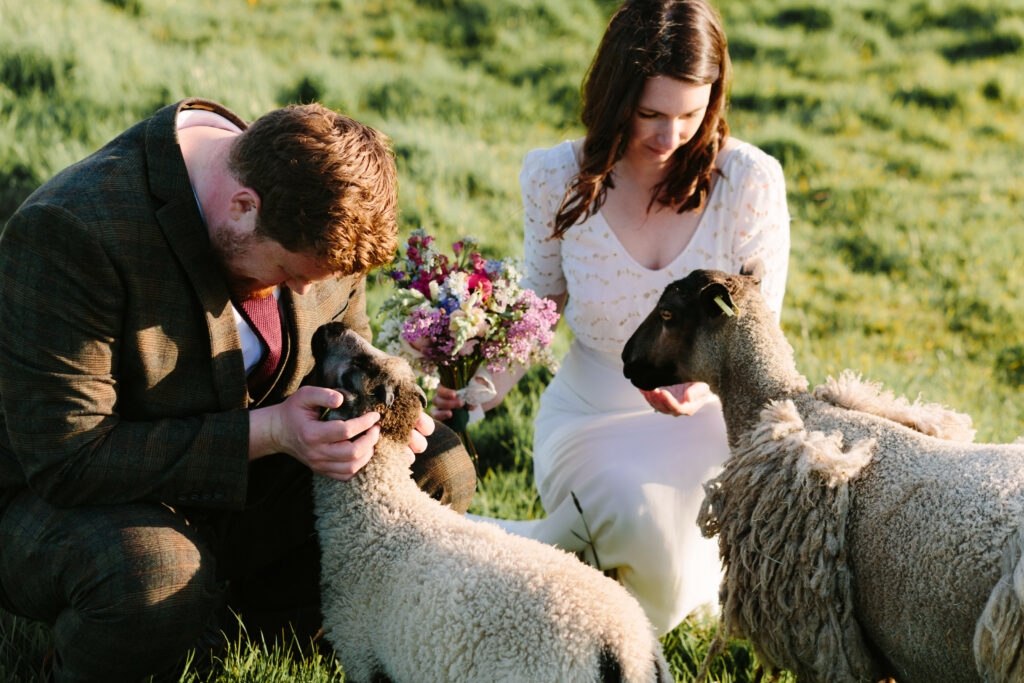 Hannah and Ben had written their own vows, which they’d kept secret from one another. I love it when this happens. The moment they hear those previously unspoken promises is really special. I encourage couples to ‘keep it real’ – that is to say, honest – when they write them. I brought their vows printed on cards (wedding dresses don’t tend to have pockets!) On the back of the cards I’d added a vintage-looking print of some wildflowers – the theme of their decorations. They each managed to read them beautifully, with a smile on their lips and a tear in their eye. Hannah’s included this promise: “I promise to let you have your nerdy stuff up in the house and that you can wear all the lame t-shirts you want” and Ben, who had written his vows in verse, included the line, “I promise to help curb your chocolate obsession, And that me giving in will be my only transgression”. They’ve since framed their vows as a keepsake. 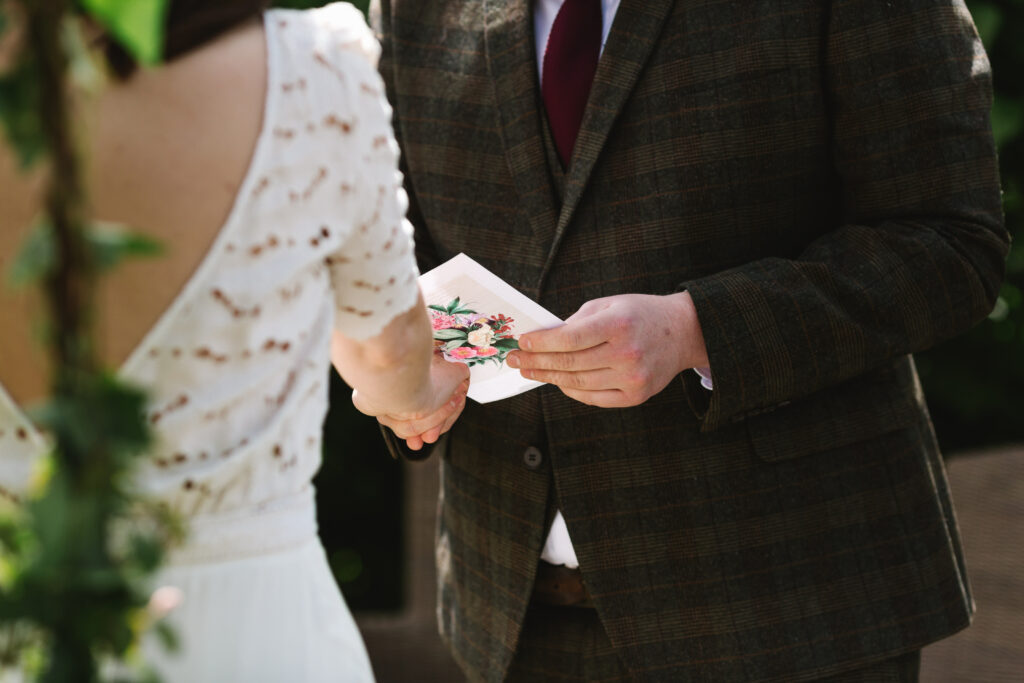 Bespoke vow cards for each wedding 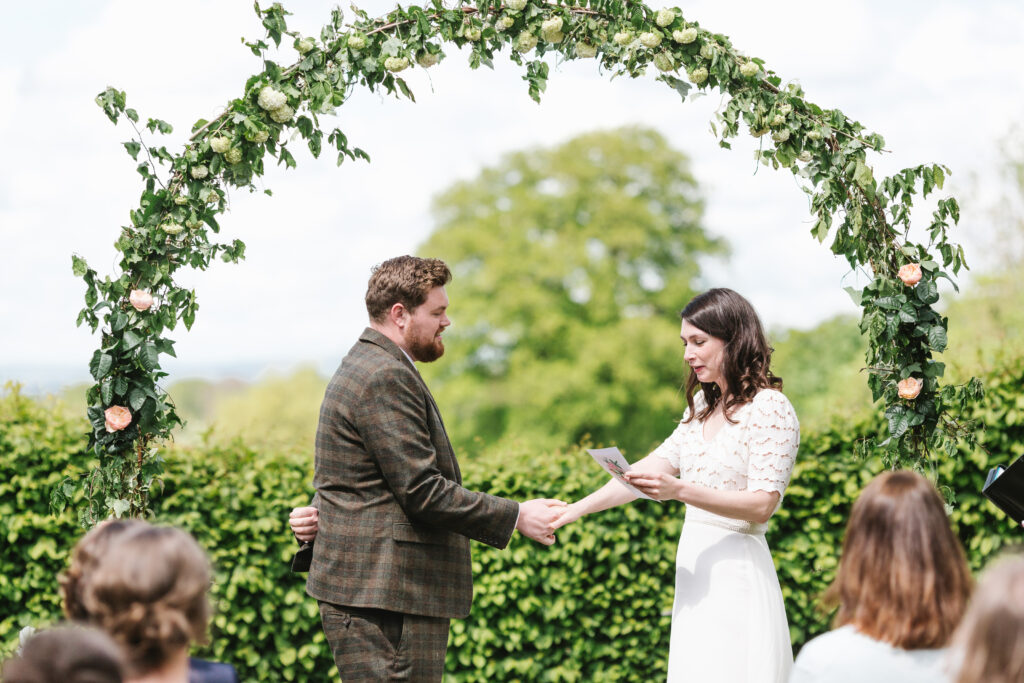 The ribbons for their handfasting were laid by their Mums and two of their friends. I’ve found that handfastings are becoming increasingly popular. It’s a very visual way of expressing a desire to be ‘bound’ to one another for life and is a fantastic opportunity to involve loved ones. Readings were The Owl and the Pussycat (Edward Lear) and Sonnet 16 (Shakespeare) and were performed confidently by friends under the arch. Paper Rings by Taylor Swift played as they made their way back up the aisle for drinks and photos. 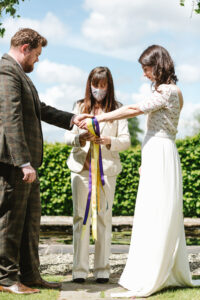 They won’t have known how happy this marriage made me. Not just because Ben and Hannah are clearly perfect for one another, but because it had been so many months since I’d performed a wedding. I’d missed the pure joy of helping people celebrate this most important milestone. I’ll treasure that day always. 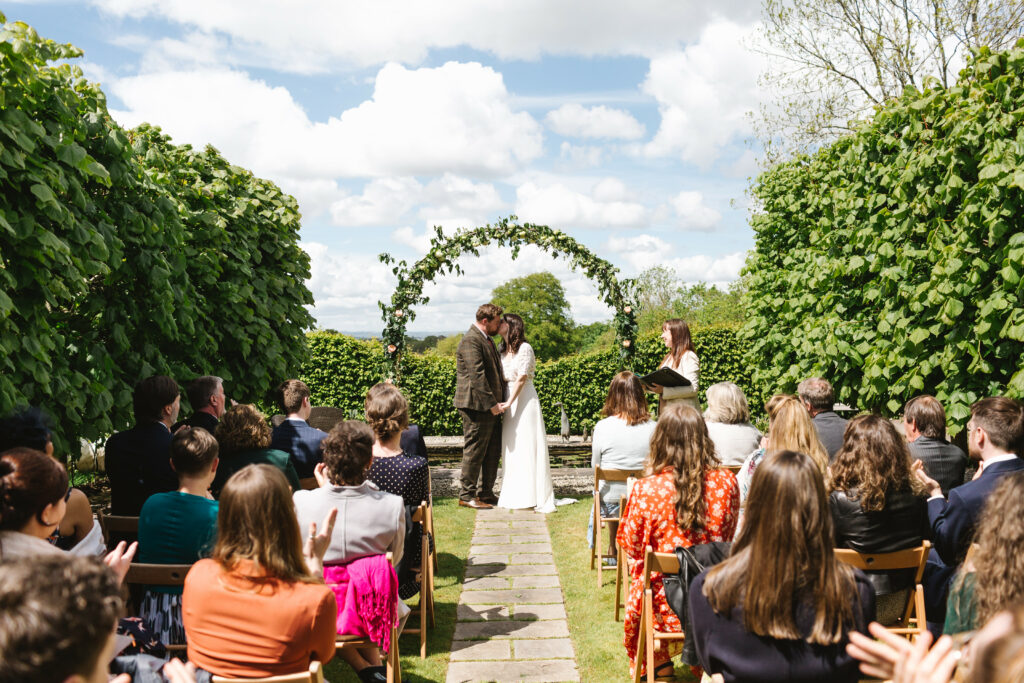 If you’d like to have a chat about planning a ceremony – a wedding, naming, re-wedding, vow renewal, coming of age or another type of celebration, do get in touch. Email: maria.thorne@humanistceremonies.org.uk Website: www.humanist.org.uk/mariathorne Facebook: @mthorneceremonies Instagram: @mariathecelebrant Tel: 07341 953442.

Lynsey from County Couture had a celebrant-led wedding herself and wanted to find out about a local celebrant offering a similar service. This article was originally published on the County Couture Website (Bridal Gowns and Evening Wear, Sidmouth) https://countycouture.co.uk/devon-weddings-humanist-wedding-celebrant/

Having had a wedding celebrant perform our wedding in 2016 I wanted to get in touch with a Devon based celebrant who provided a similar service that my husband and I chose. Here is where I found Maria Thorne – humanist wedding celebrant and she was happy to answer some of my questions to inform brides and husbands to be what her service provides.

When did you realise you wanted to become a humanist wedding celebrant?

The first wedding I ever performed was for my best friends. Standing at the front of a fairy-light laden teepee, with the rain pattering on the roof and a nervous, but elated Paul and Bruce walking up the aisle together towards me with big smiles on their faces, I realised I’d found my professional ‘home’. On that occasion, I managed to hold it together until the very end when, having pledged their lives to one another, they walked away from me to greet their guests, and I felt a warm tear of emotion roll down my cheek. What a tremendous privilege it is to help people celebrate their most joyous moments in life. True love is always worth celebrating!

How did you get into being a humanist wedding celebrant?

Having realised that celebrancy brought together many of my skills, I soon embarked on training with Humanists UK. This is a process not for the faint-hearted, but it’s worth it! The network of accredited humanist celebrants from across the UK is very well regarded and subject to a high level of professional standards. I’ve not looked back since.

Tell me a little about yourself.

I’m based in mid-Devon, where I live with my young family and a menagerie of animals in a small country village, but I cover most of the south-west. I offer both wedding and vow renewal ceremonies, with my most recent ceremony having been a 20th-anniversary vow renewal at the Harbour Hotel in Sidmouth, overlooking those iconic red cliffs. My ceremonies are often inspired by the natural world, reflective of the season.

Working with couples who want a non-religious wedding befitting them and their lives and aspirations, makes my job really varied. I meet with each couple to create a bespoke ceremony, which can be as traditional, informal, fun or creative as they wish. No two ceremonies are the same. There are no ‘set words’ or ‘order of service’ and I can always help by making suggestions about things like readings, vows and symbolic acts. Being a musician (I’m a choir director and play and sing in both rock and folk bands), I’m always up for using music in ceremonies and can even lead a sing-a-long if you like!

A humanist wedding can take place pretty much anywhere and – in addition to teepees – I’ve also performed weddings outdoors on farms, in private country houses, pub gardens and, of course traditional venues.

Meeting the couple for a chat.

The uniquely wonderful thing about a humanist ceremony is the opportunity it offers me to tell the couple’s story. When I meet with them prior to the big day, I ask a range of questions designed to elicit memories of their relationship to date. These are woven into the ceremony to the extent that I’m often asked, at the end of a wedding, “So how long have you been friends with the couple?” by people who have assumed I’ve known them for years! Stories can be touching, funny or surprising but they’re always celebratory and, somehow, act as the glue that really brings the ceremony together.

If you’d like to meet up with Maria for a (socially distanced) chat over a cuppa to hear more about how she might be able to help you celebrate, get in touch via email: maria.thorne@humanistceremonies.org.uk  or phone 07341 953442. 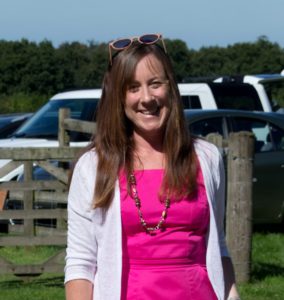 Re-booking your wedding for next year? What about a weekday?

To all those having to consider postponing their wedding until next year, here are a few thoughts on perhaps re-booking for a weekday…
If you’ve booked a licensed venue and are looking at re-booking, you might be worried that they’re likely to be pretty booked up on Saturdays into 2021 already. However, could you consider having a weekday wedding instead?
Finally, if you’re completely set on having a Saturday wedding but can’t find a ‘normal’ venue, then consider getting creative with your chosen location. One of the beautiful things about humanist weddings is that they can take place absolutely anywhere, so not only can you can consider non-traditional indoor venues, but you could also get married on a farm, at the beach, the woods or on the moors. The possiblities are endless, so please don’t lose heart!
If you’d like to discuss any of this, do email me maria.thorne@humanistceremonies.org.uk 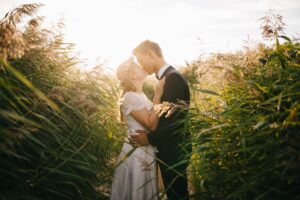 Get creative with your venue if you need to re-book.