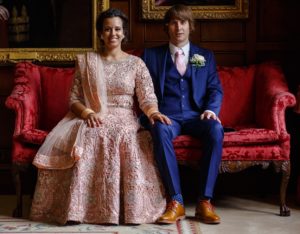 One of the stand-out benefits of having a humanist wedding ceremony is that you can design the event to fit your individual tastes, personalities, and backgrounds. And if a couple come from two different cultures, it’s possible to take traditional elements from each to create a unique ceremony that blends those cultures together in a personalised, meaningful way. After all, a wedding is more than the simple union of two people. It is the bringing together of two families and two communities of friends.

When I first met with Jessie and Dan to discuss their humanist wedding, Jessie said she wanted to include some acknowledgement of her Sikh heritage. It was fascinating to hear about Sikh and Punjabi wedding traditions.

Jessie and Dan very kindly invited me to attend a special evening of Indian traditions the night before the wedding, which included: maiyan, a cleansing ritual where a flour and spice paste is rubbed into the bride and groom’s skin; mehndi, beautiful henna decorations applied to hands and feet; jago, where the bride’s aunts wear pots on their heads decorated with tea lights and sing and dance to encourage people to attend the wedding; and bhangra, a distinctive blend of Punjabi folk traditions with Western pop music. 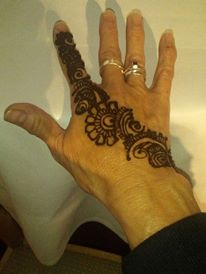 Beautiful mehndi design on my hand. 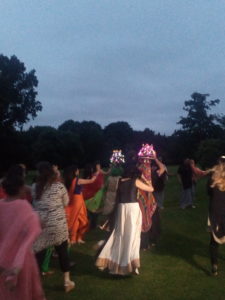 Jessie’s aunts during the jago …

One Sikh wedding custom I read about was the milni – where the key male relatives from the bride and groom’s families are first introduced. In a traditional milni, the bride’s male relatives welcome the men from the groom’s side, starting with the oldest members first. This normally involves a go-between calling out the names, the exchange of flower garlands and gifts.

We decided to incorporate a version of the milni into Jessie and Dan’s wedding ceremony to symbolise the union of their respective families. It turned out to be a lot of fun, with lots of laughter, and the assembled guests seemed to enjoy it too.

Other elements of the ceremony included two readings: the lyrics to Van Morrison’s song Sweet Thing, read by Dan’s brother; and an ancient Chinese poem called The Key to Love, which was read by three of Jessie’s university friends.  Jessie’s cousin, Sunny, also sang a beautiful, traditional Punjabi song.

Another couple who wanted to acknowledge their different cultural backgrounds was Avani (of Hindu descent) and George (half British, half Italian). It was wonderful to collaborate with this young couple to create a unique wedding ceremony that truly reflected them both as individuals and as a new married partnership.

Just as with Jessie and Dan, Avani and George invited me to a special celebration the night before the wedding and I was interested to note some similarities between Sikh and Hindu wedding traditions. I watched mehndi artists cover Avani’s hands, arms and feet in intricate decorations. Then it was time for the haldee – a cleansing ritual like the Sikh maiyan. This involved Avani and George being smeared in a special paste of flour and tumeric by their family and friends. Luckily, they changed into old clothes first! 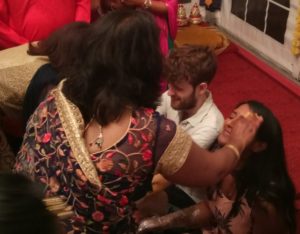 The haldee for Avani and George.

The wedding venue was a courtyard at Bushey Academy, which features a mock clocktower. This became our focal point for the ceremony and was decorated in brightly coloured, hand-made paper garlands. George and his immediate family wore Indian dress so on both sides we had flashes of amazing colour.

There is a Hindu tradition called a baraat, which involves the groom and his family and friends processing to the wedding venue accompanied by the loud beating of the dhol, a double-headed drum. So, George was carried to the venue from the car park on the shoulders of his friends with much laughter and chanting. Once everyone was settled in their seats, Avani arrived in style while George’s brother and a friend played some improvised jazz guitar and drums. So right from the start this wedding was celebrating the coming together of eastern and western traditions.

At the beginning of the ceremony Avani and George performed a version of a Hindu wedding tradition called a var mala – where they exchanged garlands to demonstrate that they accepted each other united hearts. And an extra special touch: the garlands were handmade by relatives from pages of the couple’s favourite books – Harry Potter and Philip Pullman’s His Dark Materials trilogy. 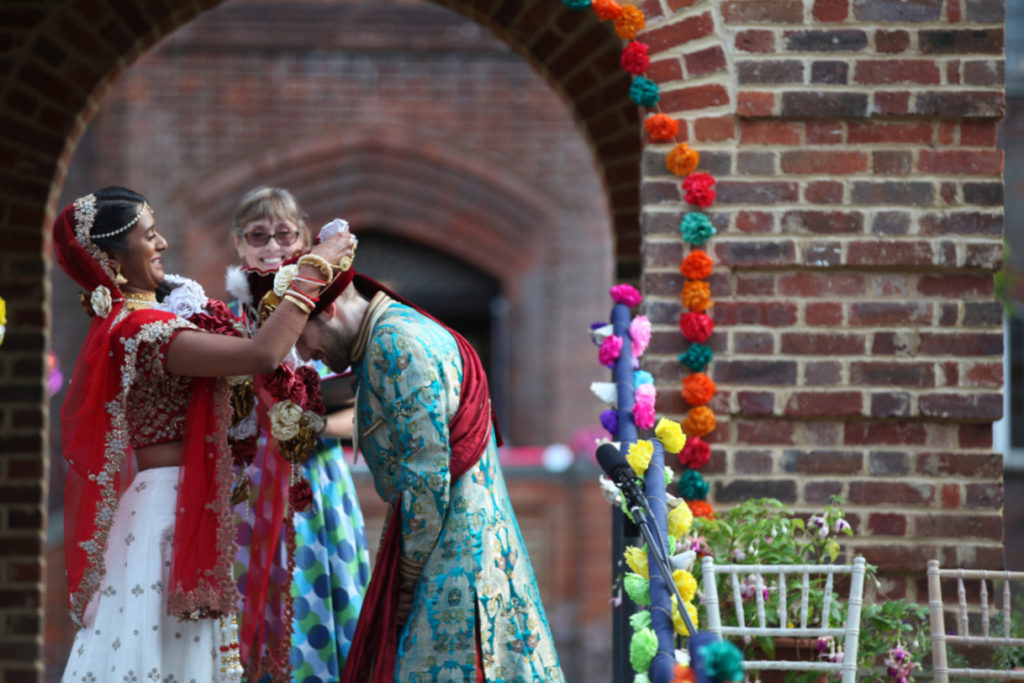 After the exchange of vows and rings, Avani and George performed a version of the traditional Hindu phera, or fire ceremony. For this, Avani and George held hands and circled a small flame in an urn seven times while two of Avani’s aunts sang a traditional Hindu song. According to Hindu beliefs, once a marriage is solemnised the two souls are joined for seven lifetimes. The seven circles the couple make around the fire represent seven promises about lifelong commitment, devotion and mutual respect.

We packed a lot of symbolic and cultural detail into Avani and George’s wedding and the result was a joyful affirmation of love, family and tradition.

Humanist wedding celebrants can create unique and personal ceremonies that not only join together couples but also blend together different backgrounds and cultures. You could say that humanist celebrants celebrate humanity.