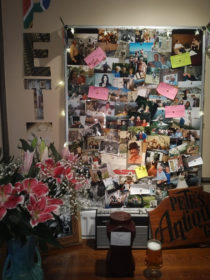 On Thursday 12th January 2017, Pete Wilson’s family and friends gathered to say farewell to him, not in a graveyard or at the crematorium but at the Wathen-Bartlett at Burley Club for an ashes-centred memorial ceremony in which we captured the life of this remarkable, inimitable, phenomenally popular and engaging bloke. Neither a bland, nor average character, Pete made the most of his life, not only as a devoted family man, but also as a sound-engineer (some of the music we heard came from the film soundtracks he worked on) and as a collector and dealer in vintage radios, antique pistols and film memorabilia. Replenishing their glasses, as Pete would have wanted them to, everyone stayed on, sharing many more memories and anecdotes as they whiled away the rest of the afternoon…

Families are increasingly choosing such a ceremony.  Like all Humanist funerals it has the life of their loved one at its heart, yet can be more relaxed and less prone to time pressures than a traditional ceremony in a crematorium or at the graveside.

Not standing by graves
Say his name in conversation
At tables where glasses are raised
Say his name where you live
In the company of friends.   Imtiaz Dharker