The permanence of memory 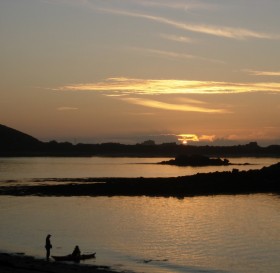 For those of us who do not have a religious faith, don’t believe in an after-life, the significance of our existence lies in the experiences and satisfactions we achieve; its permanence lies in any influence we may have left behind; and in the memories of those who knew us.

More and more families are choosing a secular funeral ceremony.  For them, the permanence of memory provides a robust, intellectual even, context for bereavement.  It provides a meaningful yet above all comforting framework for the celebration of the life of their loved one.

William Wordsworth captures the essence – the permanence – of memory so eloquently, in this short extract from his long poem The Excursion…

And when the stream that overflows has passed,
A consciousness remains upon the silent shore of memory;
Images and precious thoughts that shall not be
And cannot be destroyed.
William Wordsworth

It is this continuity or persistence of memory that I think differentiates Humanist funeral celebrations from religious rites of passage.  A secular funeral ceremony is fundamentally focussed on the deceased; on the loved one whose unique life and character, whose distinctive achievements and personality his or her family and friends will gather to honour and celebrate.

The tribute (or eulogy) at the centre of the ceremony seeks to capture this permanence of memory.  It might be written by the family themselves.  Or I will write it, connecting together the story, the anecdotes, the humour – the temperament and foibles too – that made the deceased the unique person they were.  That story will be (re)told at the family visit.  These meetings (which can sometimes last more than two hours) are mostly upbeat and affectionate, sometimes tearful and occasionally even difficult, as people deal with their grief in different ways.  But they are nearly always candid and intimate as families share memories of say their grandfather, or of their mother, or even of their son who had committed suicide, but whose qualities they were determined to celebrate.

Originally drawn into celebrancy having written the tribute for my grandmother’s funeral, it was the writing and presentational aspects of the role that first attracted me. And after the extensive training we go through it was the family visit that I thought would be the most difficult part of the job for me. Actually, it’s probably the most rewarding part. Why so? Because at these meetings, families share thoughts about a life and death – even family ‘secrets’ – with someone who only minutes earlier was a complete stranger. It’s a wonderful privilege.

If this warm tribute sits at the centre, the committal still represents the emotional heart of the ceremony. In a secular funeral the memory of the deceased is committed safe to the hearts, and the things that defined him to the minds, of the gathered family and friends who knew him best.  There will of course be due sadness at the ending of a life, yet with gratitude, with affection, with respect and above all with love the body of the deceased is committed not to an after-life, but to its natural and peaceful end.

To close the ceremony I include some more optimistic and life-affirming words; as those present return to everyday life, enriched by the memories of their loved one; and resolved too perhaps to live that one life they each have just a little more fully and to better purpose for having known the deceased and for having shared their life.

Brian Patten, in his poem So Many Different Lengths Of Time, evokes so well this notion of secular grief. For me, he captures the comfort of a non-religious farewell and so accurately reflects the idea – the centrality – of the permanence of memory…

Adapted from a talk, given in the autumn of 2012, to the Days of the Dead festival in Minstead, New Forest – January 2015